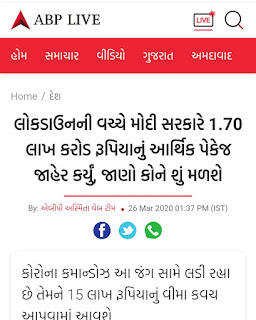 -Prime Minister Garib Kalyan Yojana to provide meal and direct benefit transfer
-This package is 1 lakh 70 thousand crore.
- In the Prime Minister's Poor Welfare Food Scheme, 80 million poor people will be provided food. There will be no poor appetite so each person will be given 5 kg of wheat or rice for the next three months. Apart from that, they will also get the same amount of five kilos previously received.
-1 kg of pulses of choice will be provided to the family for the next three months. Will also be given.
America announces largest relief package, low income people get 90 thousand rupees
-The daily wage in MNREGA has been increased from Rs. 182 to Rs. 200. 5 crore families will benefit.
-8.69 crore farmers will get immediate benefit of Kisan Honor Fund
- The first installment of the 2000 accounts will be dropped in the first week of April. 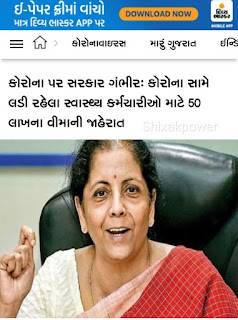 - Divorced, old and disabled will get an additional Rs 1000 for the next three months. Three crore widows and divisions will benefit from it. The money will go to their account via direct benefit transfer.
-20 crore women general account holder will get an additional 500 rupees for the next three months to help them with household chores.
Under the proposed scheme, the beneficiaries will be given a free cylinder for the next three months. Over 8 crore women will benefit.
US announces relief package of US $ 200 million (about Rs 151 lakh crore) on Wednesday
The $ 25 million fund is for people whose jobs have been lost due to coronavirus or have been affected by employment. The government will send such checks directly to such people.
$ 35,000 Emergency Loan Fund is for small US companies so their business does not stop
$ 25,000 Fund to be Announced as Employment Insurance Benefit
The $ 50,000-million fund will be declared as a loan to companies in crisis
The Deal also has a special provision. Because of this, President Donald Trump, no member of his family, any member of Congress will not be able to get a loan or investment in the amount of this package. This provision has been used to prevent misappropriation of funds.
important Link::::